To celebrate the 48th anniversary back in December 2019 of the founding of the United Arab Emirates, we decided to share one of the most important and sacred patriotic symbols for Emiratis: falconry, a sport using birds that has been elevated to the category of Intangible Cultural Heritage by UNESCO.

In preparing this post I had the help of Raquel Covarrubias, a Mexican native of Guadalajara, Jalisco (like me!) who, together with her husband, Leonardo Vargas (from Ciudad Guzmán, Jalisco), are in charge of a breeding project of Gyrfalcon and Peregrine Falcons in Abu Dhabi. Both have dedicated more than ten years to falconry, and what Raquel shared with me about this branch of biology is fascinating. So join me in learning about Raquel and Leo, as well as the most important sport in the Emirates! 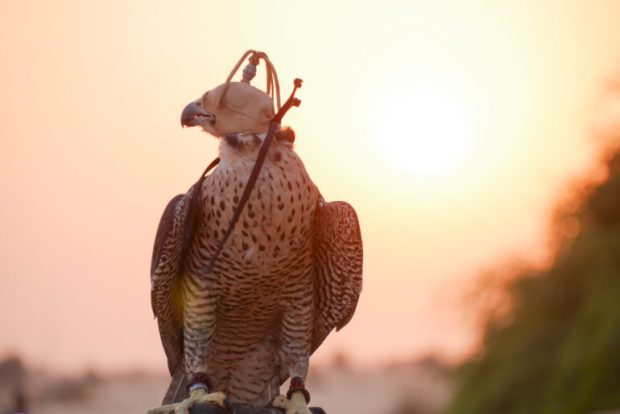 Falconry is the name given to the human activity of hunting food using birds of prey, such as falcons. It is an ancient activity that has its origins in Asia and the Middle East and was widely used by nomadic tribes to find food. Falcons were trained to hunt different types of animals such as foxes or hares, and in doing so they were able to feed both the members of the tribes and themselves.

This form of hunting has been disappearing as more efficient hunting methods are developed. However, falconry is still practiced as a sport and as a result of this, various conservation projects have been carried out to protect the birds and the practice worldwide. Some examples Raquel shared with me include The Mongolian Saker Project (sponsored by the Abu Dhabi Falconers Club), The Houbara Fund and The Peregrine Fund. 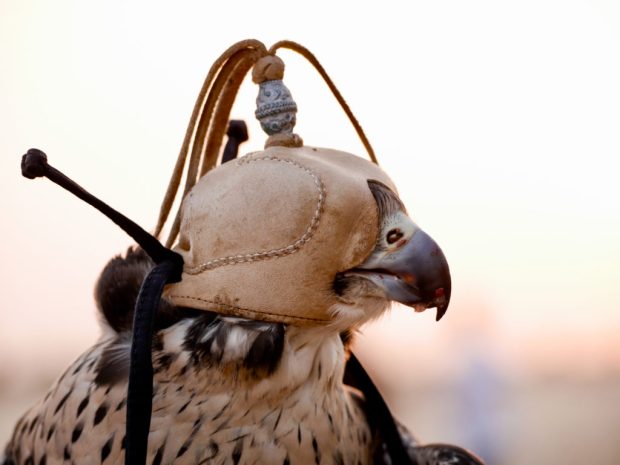 Why is falconry so important in the UAE?

Falcons and falconry are considered so important in the Emirates that the falcon has been declared the national bird, and is the only animal that can travel inside the cabin on an Emirates airline flight – meaning Emiratis can literally travel with their birds in the seat next to them! So you can imagine what an important position they occupy in the local culture. It’s not for nothing that the falcon is stamped on almost all Emirates flight tickets and is part of the logo of Abu Dhabi ADNOC gas stations. The Emirati capital is also home to the largest falcon hospital in the world.

But why are falcons so important? This is because, in the past, hunting with the help of falcons was the main means of subsistence for the Bedouin people. In an environment as hostile as the desert, in which moving from one place to another was extremely difficult, the hunting with falcons played a vital role in the survival of the tribes for 4,000 years.

Living in the desert is arduous, but the peoples of the Arabian Peninsula have managed to adapt to these difficult conditions and, today, the Peninsula is one of the most prosperous regions on the planet. Falconry in the UAE represents the values that allowed the Bedouin to flourish, such as the sense of courage, honor and nobility, as well as the virtues of patience, willpower and companionship. This was said by Sheikh Hamdan bin Zayed Al Nahyan, President of the Emirates Falconers’ Club.

To this day, many Emiratis have falcon hatcheries and practice this sport as a hobby. The practice is also a popular cultural attraction for tourists – almost all activities in the desert include a live demonstration of the sport and it’s common to see falcons ready to pose for photos with people in different tourist spots in the cities. 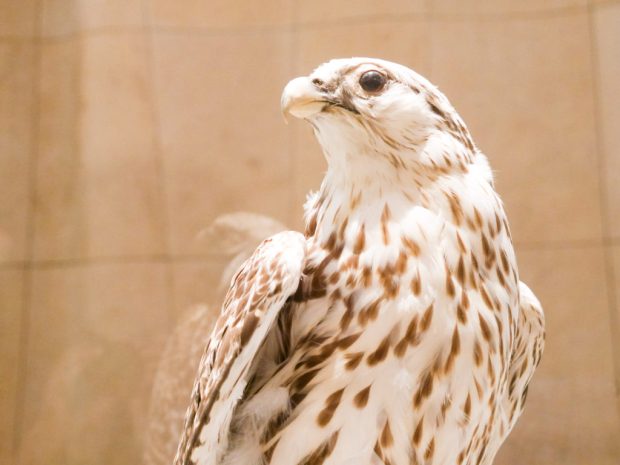 The story of Raquel and Leo is interesting and inspiring.

Raquel is an architect and she first discovered falconry when she met Leo, who studied biology at the University of Guadajalara and took her with him on his expeditions in the field so that Raquel could take pictures of the falcons. His hobby became a passion, so he decided to leave architecture and become a full-time falconer.

In 2014 they went to work in the UK at a falcon farm, and when they returned to Mexico, they spent five years running their own biological control company looking after falcons. At the beginning of 2019 they moved to the Emirates to take charge of a breeding project for Gyrfalcon and Peregrine Falcons. 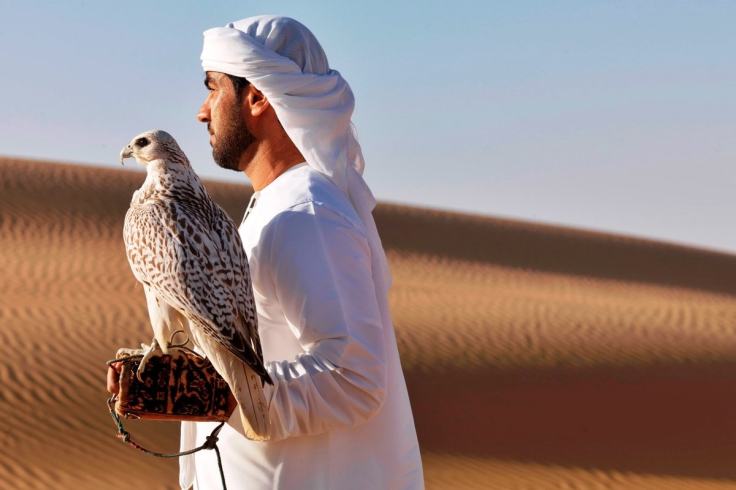 We hope you’ve enjoyed this story. Have you ever witnessed falconry in action in the UAE or the wider region? If so, we’d love to hear your experiences of this fascinating and beautiful tradition. 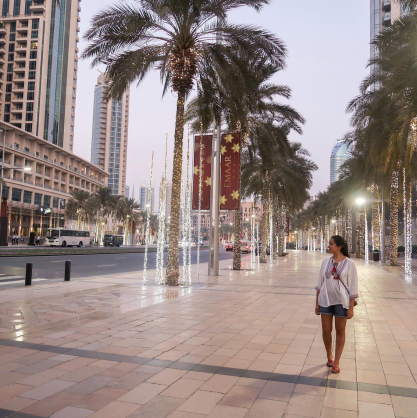 This article was originally published in Spanish on the Dunas y Palmeras blog.

Gaby is a lawyer and mother of one from Mexico, living in Dubai. On her blog, Dunas y Palmeras, she shares her experience of living in the UAE with her family. Dunas y Palmeras is an essential resource for native Spanish speakers living or travelling in the Emirates. To hear more from Gaby, check out the blog or follow her on Instagram.

A financial guide to relocating to the UAE

Feynan Ecolodge: Setting the standard for eco-tourism in the Middle East

This gorgeous photo was taken just a few weeks ago on the streets of Marrakech by @soukandco, celebrating the beginning of strawberry season. 🍓🍓🍓 How quickly things have changed… One positive development I’ve noticed as a result of the pandemic is that people seem to be buying a lot more local produce than before due to the empty supermarket shelves and the need to shop closer to home. This inevitably also means people are shopping seasonally as well, getting creative with what’s on offer from their local farmer or grocer in lieu of Mexican avocados and Peruvian blueberries. It would be wonderful to see this continue in the post-corona era, as more and more people discover the joys of local shopping, conscious eating and creative cooking… What’s in season where you live at the moment?! And what new recipes are you trying at home? . . . . #consciouseating #shoplocal #cooking #morocco #marrakech #strawberryseason #medina #corona #coronavirus #quarantine #covid19 #socialdistancing #selfisolation #northafrica #everydaymorocco #localproduce #مغرب #مراكش #فراولة #فواكه
This photo of an abandoned plane in the Abu Dhabi desert feels a bit too close to home at the moment… We’ve been umming and ahing about whether we should continue to share pictures of people’s travels in the Middle East and North Africa right now what with everything going on in the world. It feels out of touch somehow to be sharing pictures of beautiful places that no one can visit, particularly when people are dealing with something so scary and confusing. But after a lot of thought we decided that people still need reminding of what a beautiful place the world is, and of what’s waiting for us beyond our front doors when this is all over. What we will try and do, though, over the coming months, is try and use this platform to encourage us all to reflect on what makes travel not only important to our own personal journeys, but also a tool for making the world a more connected, tolerant and peaceful place. During these strange times when we’re being forced to look inwards, I hope we’ll all be able to take the time to consider how we can continue to explore the world with greater consciousness and awareness of the impact – both positive and negative – that we have on the places we visit. As usual, we’ll be sharing images of the stunning natural beauty of the Middle East, but with a greater focus on how we can and should protect and preserve it. We’ll be sharing aspects of the rich cultures of the region as a reminder of the responsibility we have to respect and learn about local traditions and customs when we visit a place. And of course, we’ll be sharing lots of inspiration – from recipes to books to home décor – to keep you feeling positive, inspired and creative during your time at home. And we’d love to hear from you! Has the current situation changed the way you think about travel? Does it make you want to explore more of the world, or stay at home with your loved ones? And how do you think travel and tourism will change after this is over? Leave a comment and share your thoughts on this fascinating, world-changing period we’re living through! . . . . Incredible photo by Dmitry Osadchy (@like_a_free) #travel #MiddleEast #NorthAfrica #MENA #covid19
This is the intricate work that goes into producing Persian carpets. A master at work in Tabriz, Iran, captured by @gh._sanaz. ✨ . . . . #Iran #Persiancarpet #Persia #Iranian #iranianculture #carpet #souq #bazaar #everydayiran #tabriz
Well hello, April! And Happy Hump Day (in case you’d forgotten what day it is) 🐪🐪 I love the start of a new month. It’s like a mini new-year every 30 days - a chance to reset, recalibrate, review my goals and think about how I want to spend my time. After probably the strangest month that we, collectively, have ever lived through, this seems more needed than ever. I hope you’re all able to take a step back and get intentional about how you want to spend the next few weeks - whether it’s learning a new language, starting a business, or just slowing down and catching up on sleep. However you’re experiencing this strange and confusing time, you’re not alone. Although we are all experiencing this differently, there’s something cathartic in the idea that everyone on earth is going through this. All we can do is try our best to put one foot in front of the other and stay positive. We just sent out some positive and uplifting stories from the Middle East in our Hump Day Newsletter - if you’re looking for a bit of inspiration during these bizarre times, click the link in our bio to sign up and join us. How are you staying positive at the moment? Leave a comment below and let us know. Wishing you all the best, wherever in the world you are. ✨ These gorgeous camels were photographed in Abu Dhabi by @yobelprize
Palm trees for days – Birkat al Mouz, Oman 🌴🌴🌴🌴🌴🌴🌴 One of the things I love about the interior of Oman is these glorious sprawling palm groves with tiny minarets poking out of the top. One of the best such views is from Nizwa Fort, where you get a 360 view of the surrounding villages and palm groves, like Birkat al Mouz. . . . . Beautiful photo by @holydanoly #Oman #Nizwa #palmtrees #BirkatalMouz #dakhiliyya #Omani #traveloman #middleeast #everydayoman #arabia
Patterns on patterns at the Nasir ol Molk Mosque in Shiraz, Iran. ✨ . . . . Glorious photo of @zhi1ajoon #Iran #Shiraz #NasirolMolk #Iranian #Persia #Persian #everydayiran #mosaic #persianarchitecture #traveliran