The Last Optimist in Baghdad by Dr Brian Brivati is the true story of Ghassan Jawad Kadhim – an optimist, a peacemaker, a father, a friend. An Iraqi. 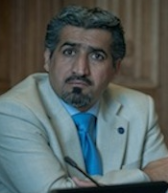 This moving memoir of the resilience of one man manages to tell the tale of the ceaseless endurance of Iraq as a whole, providing a poignant insight into what the future will hold for this troubled country and its people.

Ghassan comes across in the book as somewhat of an enigma. Immaculately dressed in a three-piece suit with matching tie, glasses frame and pocket handkerchief, Ghassan bears no physical mark of the traumas he has endured. Dr Brivati describes his magnetic personality and ability to always be at the centre things, explaining how they have helped him meet a host of important and influential people but have also led him into trouble.

The author met Ghassan when he represented Iraq on a programme run by the John Smith Trust in London. He recalls how Ghassan unsurprisingly took centre stage in a photoshoot with then Prime Minister David Cameron – “not because he forces his way to the front of the queue. That’s because the front of the queue is wherever he is standing.”

Ghassan has faced kidnap, torture, assassination attempts, bombs detonated on his street, the death of friends and loved ones. The kinds of traumas that have come to characterise 21st century Iraq. Yet, somehow, he remains optimistic. If not for his own future then for the future of his country and its people. “Despite himself almost, despite his level of knowledge, despite his feeling of mistrust, despite his experience, he continues to fight.”

The author describes Ghassan as a “fixer”; someone who knows how to work the system; someone who figures out who you need to talk to to get things done and then makes it his business to befriend them. This is no accident, but the product of years of coping with the inefficiencies of a failing state.

Iraq, as the book explains, is currently facing one of the biggest challenges in its history. The Iraqi army’s campaign to drive Daesh out of Mosul – its former stronghold in the country – is nearing its end. The country must now attempt to rebuild itself after decades of violence, repression, ethnic and sectarian conflict and foreign intervention. The possibility that Iraq will divide along ethnic and religious lines is real.

Daesh took control of Mosul in the summer of 2014, exploiting the power vacuum left behind by years of conflict and foreign occupation (image: NBC News)

Dr Brivati expertly outlines how the post-conflict reconstruction process is fraught with difficulties.  Towns and cities are home to a mixture of ethnic and sectarian groups, some of whom have lived there for years and others who were displaced and forcibly relocated at various stages of the conflict. Once Daesh has been driven out of an area, people start to return home. Their desire for revenge is strong and the transitional justice process unthinkably complicated. Disputes over property rights also complicate matters in every area where people were displaced by the conflict.

This will be the real struggle for Iraq. The way this plays out will determine whether the country will remain whole or break apart.

A woman escapes with her baby from a Daesh-held area of Mosul as the Iraqi army fights to take back the city (image: Newsweek)

Despite this rather bleak picture, The Last Optimist of Baghdad is as much a testimony to the optimism of the author as to that of its protagonist. In his analysis of the situation in Iraq, Dr Brivati’s remarkable expertise and experience of working in the country are evident. But what also shines through, particularly when he talks about Ghassan, is his hope for the future of the Iraqi people.

His optimism is neither blind nor naïve (he offers a fascinating, if cynical, insight into the workings of the UN and international development bodies in conflict zones) but is based on years of working with people like Ghassan. Years of watching Iraqis, who have endured hardships we could never imagine, show up for meetings in the face of all adversity, immaculately dressed and with smiles on their faces, ready to rebuild their country.

Ghassan (left) stands next to the author, Dr Brian Brivati

“What completes the picture and sums up the miracle of survival that is Iraq, is that the frame of his glasses also matches his tie and his handkerchief.”

The Silk Roads: History as you’ve never been taught it

5 thoughts on “The Last Optimist in Baghdad”

Patterns on patterns at the Nasir ol Molk Mosque in Shiraz, Iran. ✨ . . . . Glorious photo of @zhi1ajoon #Iran #Shiraz #NasirolMolk #Iranian #Persia #Persian #everydayiran #mosaic #persianarchitecture #traveliran
This is what happens when you fly your drone in the Saudi desert… The Ministry of the Interior pull you over to ask for a photo 😂🇸🇦 Love this story from @jameela.ahli! #Saudi #SaudiArabia #everydaysaudi #MadainSaleh #AlUla #desert #saudidesert #middleeast #everydaymiddleeast #dronephotography #sauditravel
A fruit vendor loads his truck in Beirut. Watermelons are a Lebanese staple, particularly in summer, and are best enjoyed in a salad, with labneh, or blended into a refreshing juice. 🍉 . . . . Photo by @ranasw #Lebanon #Beirut #watermelon #MiddleEasternfood #Lebanesefood
This is a traditional Omani burqa – originally designed and used to protect women’s faces from the sun and the sand. While for many outside of the Middle East, the burqa is a symbol of oppression and gender inequality, the Omani burqa is quite the opposite. What was once worn by Bedouin women for functionality became, over time, a fashion statement. While it is still worn by some Omani women today, it is also a celebrated symbol of the country’s cultural history. 🇴🇲 . . . . Beautiful photo by @maxxetto #Oman #bedouin #burqa #Omaniculture #culture #experienceOman #travelmiddleeast #middleeast #middleeasternculture #everydayoman #omanipeople
How DELICIOUS do these “kunafolis” look, created with love by @dinewithdina!? London-based foodie, Dina, cooks the most wonderful mixture of food that’s often infused with bites of her Omani and Zanzibari heritage - quite a common mix because of the historical links between Oman and the Tanzanian island. I absolutely can’t wait to try one of her supper clubs! London friends, follow her and keep an eye out for her next one - she’s using her self-isolation to try out new recipes… I’ll see you there!! 👩🏽‍🍳🌸✨ . . . . #Omani #Zanzibari #supperclub #Oman #Zanzibar #MiddleEasternfood #knafeh #kunafolis #kunafa #MiddleEasterndesserts #Palestinianfood
Hold your head high this Hump Day like this proud fellow at the Pyramids of Giza! 🐪 Thinking of everyone in the tourism industry this week, we love you (and will be back as soon as we can...) ❤️✈️ . . . . Thank you @naffeea for this gorgeous shot! #camel #humpday #happyhumpday #pyramids #egypt #egyptianculture #everydayegypt #egyptian #camelsofinstagram