“Music gives me power, it gives me hope. It moves hearts… Strings have more power than bullets, stronger than bullets” – Masoud Buisir, the Troubadour of the Libyan revolution.

You wouldn’t necessarily expect this statement to come out of Libya, a country that has been torn apart by revolution, counter-revolution, extremism and warring factions since 2011. But in almost every way, Masoud Buisir defied expectation. With his camouflage clothes, his thick, curly hair and his battered old guitar – which he called his weapon – Masoud became a well-known figure on the frontlines of the 2011 uprising in the eastern Libyan city of Benghazi.

He became the voice of the revolution in Benghazi, singing his songs to fill the fighters with hope and determination in their battles against the regime of former president and brutal dictator, Colonel Muammar Gaddafi. Even when Masoud was shot, he continued playing as he was carried away on a stretcher until he eventually passed out. “I think the sniper doesn’t like music”, he later joked.

As well as the voice of the revolution, Masoud is now the face of a new documentary film – named Stronger Than Bullets in honour of his defiance – which follows the lives of the musicians on the frontlines in Benghazi and the explosion of the music scene in post-Gaddafi Libya.

In 2011 when Director Matt Millan was living in LA, he met up with a Libyan friend named Homouda for coffee. The so-called Arab Spring had just started to trickle over the border into Libya from neighbouring Egypt and Tunisia. “I’ve been away from home for a long time,” said Homouda, “I’ve really gotta go back. Do you want to come with me?”

Millan’s first response was, “Are you crazy!? I don’t want to go into the middle of a revolution!” But after thinking through it, he decided to take his camera and go with Homouda to document the protest movement. What he found astonished him. When he arrived in Benghazi, he found an explosion in the arts that brought to life the passion and energy of the resistance and reflected the local people’s hopes and dreams for their country.

A Slayer fan himself, he was particularly struck by the local music scene and the role local hip-hop artists and heavy metal bands were playing in the resistance movement.

“Gaddafi took away our music, our identity, our culture. Creativity was a threat to him.”

Under the tyrannical rule of Colonel Gaddafi, music and the arts were heavily repressed. Gaddafi saw music and the means of self-expression it provided as a threat, and in 1985 he had thousands of musical instruments publicly burned. The only music that was heard in public was music praising Gaddafi. “If you weren’t singing about Gaddafi, you weren’t singing,” says Millan.

What emerged as a result of this repression was a secret, underground music scene inspired by the likes of Slayer, Tupac and even Phil Collins. Musicians who had been in hiding for years came out of the woodwork in 2011 and became the voice of the revolution. For them, music was an act of defiance, as well as a way of instilling hope and determination in the fighters on the frontlines.

Stronger Than Bullets follows the lives of these talented and brave musicians, documenting their hope, fear, frustration and loss.

“We’re just asking for freedom – nothing more, nothing less.”

One of the most moving events in the film is the death of Rami el-Kaleh, an Irish Libyan musician whose song, ‘We Will Not Surrender’ became an anthem of the revolution. Rami was killed by Gaddafi loyalists in Benghazi in March 2011 and his death inspired the other musicians and resistance fighters to continue the struggle for their freedom.

One of these musicians was hip-hop artist Youssef Said, also known as MC Swat. Rising to fame in Libya after 2011, MC Swat championed the role of music in giving a voice to the voiceless. During an interview shortly after the outbreak of revolution, he was asked what might have happened to him had he performed his rap music during Gaddafi’s rule. He laughed, replying “I’d be shot dead like Tupac”. 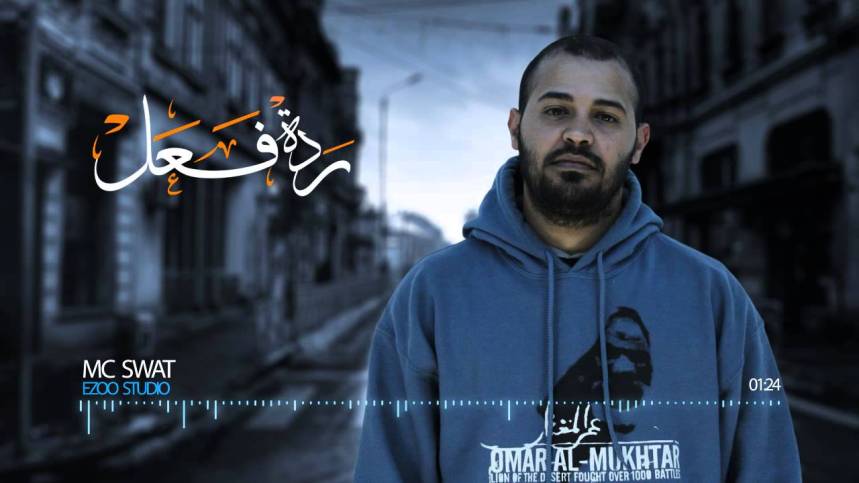 Post-2011, MC Swat’s music called for an end to sectarianism and violence between rival factions, calling out corruption and injustice on all sides of the conflict. But his outspokenness angered some people, leading him to receive death threats and forcing him to flee Libya for his safety. He now lives as a refugee in Europe.

The film also follows the work of Dado, a Bosnian Muslim who moved to Libya as a refugee during the conflict in Bosnia in the 1990s. Dado fell in love with Benghazi and, under Gaddafi, he produced music by Libyan artists in secret. Nicknamed the ‘white Libyan’, Dado would never leave. Even as the revolution turned sour and tribal and sectarian conflict began to take hold of the country, Dado has steadfastly stayed in his adopted country, even as other Libyans have fled.

Malik L is a Libyan-American hip-hop artist who watched the outbreak of revolution from his home on the east coast of the US. Like Homouda, Malik decided to travel to his ancestral homeland to support the Libyan people in their struggle against dictatorship. He ended up performing alongside local artists like MC Swat at opposition rallies and concerts. In an interview, Millan described how Malik L’s “east coast, public enemy hip-hop” was quickly infused into the local Arabic style.

And then, of course, there’s Masoud. The Troubadour. The musical icon of the resistance. Millan describes Masoud as “what Bob Marley wanted to be … the true spirit of rock and roll”. In 2014, Masoud died of a heart attack, leaving behind his wife and young son. This film is a testament to his fearlessness, his sense of humour, and his tenacious spirit. His legacy lives on in the hearts and minds of the musicians who were inspired by him and the Libyans who continue to dream of peace and freedom.

“This is the genesis of a counter-culture.”

By telling the stories of musicians in one of the world’s most complicated and turbulent countries, Stronger Than Bullets bears witness to the emergence of a counter-culture, which Millan believes is embedded with the same hopeful spirit of the 1960s.

It also highlights the power of music for inspiring resistance and holding accountable those in power – whoever they may be: the film draws parallels between Gaddafi’s strategic repression of music and the arts and the similar attempts of extremist groups like ISIS to stamp out creativity in Libya today.

But more than anything, Stronger Than Bullets shows how music builds connections based on common humanity, transcending identity politics and bridging cultural, religious and political divides. For this reason, it might just be one of the most important films made so far about the Arab Spring. By focusing on the music, the viewer forgets about the differences between themselves and the Libyans. The film’s protagonists are no longer rebels, fighters, prisoners, or refugees. They’re people, who also happen to like hip-hop.

You are the defiant bloom in this desert waste.

You are the voice that shatters these chains.

You are the revolution that sleeps within us.

You are the Troubadour.

By Matthew Millan, for Masoud Buisir

Stronger Than Bullets is now streaming in the USA on Amazon and iTunes, and will be available in the UK on Amazon and the Sky Store on November 16th. You can also watch Matt Millan interview MC Swat for his new mini-series, Beyond Borders, here.

Iran’s City of Lies: Extraordinary stories of love, sex and death in Tehran

3 thoughts on “Stronger Than Bullets: Music on the Frontlines of Libya’s Revolution”