We thought this would be an excellent opportunity to showcase and celebrate Waad’s story and her success, along with some of the other great achievements of Arab women in film in recent years. Below are three incredible films from inspiring female directors from the Arab World that you absolutely need to watch!

For Sama follows the heart-wrenching and at times terrifying story of how one woman and her family lived through five years of the Syrian civil war in one of the worst affected cities – Aleppo. It documents how she fell in love with a Syrian doctor, married him and had her baby daughter, Sama, for whom the film was made to tell the story of the war. In an interview, al-Kateab said that being pregnant made her feel powerful, knowing that she was bringing new life into a place where there had been so much death. It gave her hope, and felt like a way of fighting back against the brutal attempts of the Assad regime and its Russian allies to quash all resistance from the people of Aleppo. 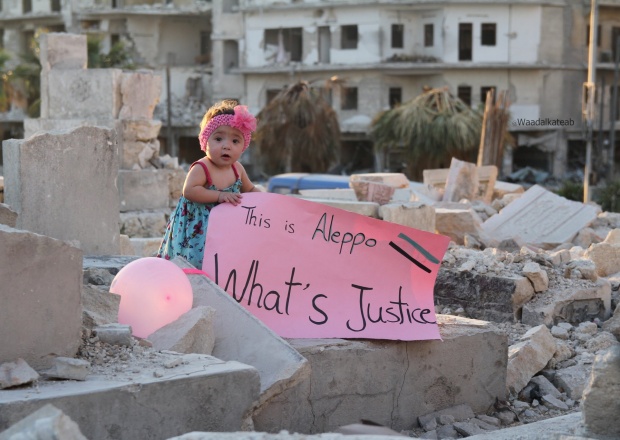 When she was growing up Waad wanted to be a journalist, but like many other Syrians the civil war put her dreams and ambitions on hold. She never anticipated that her videos would one day be made into a feature film. She recently explained how she, her family and the people of Aleppo were focusing only on survival, living life one day and even one minute at a time knowing that it could very easily be their last.

But in 2016, Waad fled Aleppo with her family and 500 hours of footage which was used to create this powerful and moving film. She now lives in London with her family and works as a journalist for Channel 4. She responded to the news of her nomination for an Oscar with a powerful message about the situation in Syria today:

“We hope that the nomination will encourage as many people as possible to go and see the film and learn the true story of the Syrian conflict. And we ask them to remember that what they see in the film is still happening today in Idlib, the last part of Syria outside the control of the Assad dictatorship, where hospitals, schools and children are being bombed by the regime and its Russian allies every day.”

Watch For Sama for free on More4

Nadine Labaki is a Lebanese director, activist and actress who directed the award-winning 2018 film, Capernaum. She grew up in Lebanon during the bloody civil war, which she believes heavily influenced her life and work. The war shaped her career path, she explains, because she used to watch lots of films as a child to escape the reality of living through the conflict. she spent hours and days in shelters and confined spaces, hiding from the violence and passing the time watching movies. Cinema became her shelter and her escape, she says.

Labaki believes in the power of cinema to create social change, as it humanises the issues facing the world, allowing people to identify with those most affected in a way they never could just by learning about conflicts and global issues through the media.

Capernaum, which means confusion or chaos in Arabic, follows the story of twelve year old Zain, who lives in a Beirut slum. When his parents are unable to take care of him, he decides to sue them for neglect, running away from home and living for a time with a refugee from Ethiopia and her baby.

The film was influenced by Labaki’s life in Lebanon and her first-hand exposure to the fallout of the Syrian conflict, and how it affected her country and the hundreds of thousands of Syrians who have taken refuge there. She spent time talking to refugee children, listening to their experiences of violence and neglect. This was where the idea for Capernaum was born – she hoped the film could translate their struggle to viewers around the world.

Capernaum won the Jury Prize at Cannes Film Festival in 2019, along with being nominated for an Academy Award, a Golden Globe and an Oscar.

Wadjda is the story – and the name – of a vivacious, rebellious 10-year-old girl living in a conservative suburb of Riyadh, Saudi Arabia. Wadjda is determined to buy a bike to beat her friend Abdullah in a race, however bicycles are seen by many in Saudi society to be inappropriate for girls and dangerous for their virtue. So when her mother refuses to allow her to have a bike, Wadjda decides to raise the money herself.

Made in 2012, the film was the first to be shot entirely in Saudi Arabia, and is the first feature film made by a Saudi filmmaker. Directed by Haifaa al-Mansour, Wadjda challenges cultural and social norms in Saudi Arabia, highlighting the challenges faced by Saudi women as a result of legal inequalities and extreme cultural conservatism.

The film is a phenomenal example of how Saudi – and more generally Muslim – feminists are pushing back against social norms that have traditionally limited their freedom, whilst simultaneously shattering stereotypes of Arab and Muslim women as oppressed and lacking agency. Al-Mansour directed parts of the film hidden in the back of a van, to avoid being seen and falling foul of restrictions against men and women working together. The film cause controversy in Saudi Arabia, sparking debate about modernisation and the role of women in society.

Halah al-Hamrani: The Saudi boxing instructor teaching women to ‘Fight Like a Girl’

#Influencers: 5 people inspiring positive change in the Middle East and beyond

Freedom is an Inside Job: Iraqi activist Zainab Salbi on how to heal the world

Subscribe to the Hump Day Newsletter to get the latest blog posts from Pink Jinn and insights into what’s going on in the Middle East and North Africa  – delivered straight to your inbox on the first Wednesday of every month!