It’s hard to imagine a society that prohibits the participation and viewing of sports based on gender. Unfortunately, this is the case in Iran. There was a brief period in 2006 when then-president Mahmoud Ahmadinejad announced that women would be allowed to attend football matches, until Supreme Leader Ali Khamenei intervened and reinstated the ban. While Iranian women have been barred from watching sporting events in public since the 1980s, it was only in 2018 that they were finally granted entry to the Azadi Stadium in Tehran.

Prohibition from watching a simple football match is one of the many struggles that Iranian women face daily. It is difficult for women’s rights to progress when the Ayatollah, who has the final say in most matters, espouses views that are detrimental to the movement. A compilation of tweets translated from Farsi by The Washington Post reflects his belief that the primary role of women is as mothers and educators. He is against the ‘deviant lifestyle’ that women in the ‘West’ lead, which he uses as justification for the compulsory hijab.

However, many women view the hijab not as a symbol of modesty but of oppression. One such woman is Masih Alinejad who started the ‘My Stealthy Freedom’ movement, which encourages Iranian women to post photos online with their hair uncovered.

There have been many protests pushing for the policy to be abolished, but so far these have been to no avail. Foreigners in Iran are also forced to abide; In our recent guide on what to wear while travelling the Middle East, Pink Jinn noted how, while there is no law requiring foreign women to cover their hair in public in Iran, not doing so is frowned upon.

Despite conservatives like the Ayatollah, there are other people in power who are relatively more progressive and advocate for women’s rights. In 2016, President Hassan Rouhani expressed his disapproval of undercover police tasked with reporting women for violating the headscarf law. He is favoured by younger generations and many Iranian women, thanks to his pledge to honour human dignity for everyone, especially women.

Since his election in 2013, and again in 2017, Rouhani has called for reforms that promote women’s involvement in public spheres. Bloomberg reported that Rouhani wants one-third of managerial positions to be filled by women by 2021, when his second term will end. However, the number of women appointed by Rouhani did not increase on his re-election, for which he drew criticism. Pressure from hard-liners likely made it difficult to fulfil his promise. He has since named three female vice-presidents to run government organisations, but still no ministers.

While the women’s movement has been slow-moving in the past few years, Iran’s bid in the World Cup this last summer proved to be an effective catalyst for the women’s movement, specifically the match against Spain. It made for an exciting event for the entire country to watch their national team on the world stage. In an article on the recent World Cup, journalist Richard Marsh writing for Ladbrokes remarks how this was Iran’s fifth appearance at the tournament. But what made it historic is that, for the first time, women were allowed to watch the live broadcast in public, at a packed Azadi Stadium. Female football fans are able to join their male counterparts in Azadi Stadium for the first time (image: RT)

In the past, women have worn disguises just to be able to attend live football matches, although many were ultimately caught and arrested for violating the law. While it may seem like a small victory, this can still be seen as progress compared with five years ago, when Iran last qualified for the World Cup and women were still forbidden from watching the games. It is in these small victories that we hold on to hope that brighter days are ahead for the women of Iran. 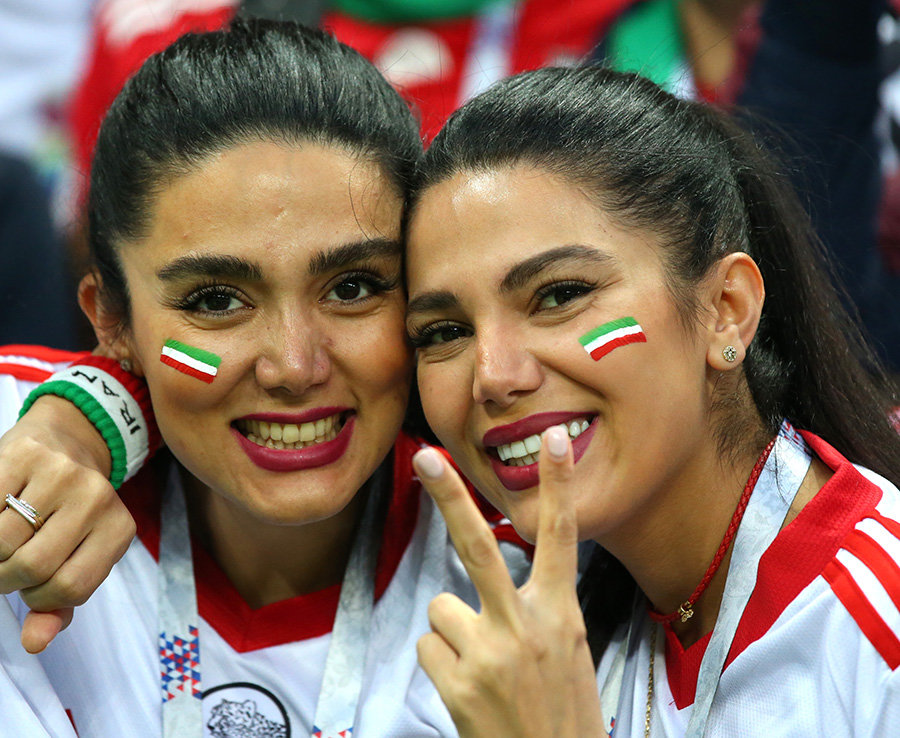 Freedom is an Inside Job: Iraqi activist Zainab Salbi on how to heal the world

What to wear when travelling the Middle East

10 badass Middle Eastern women you need to know about